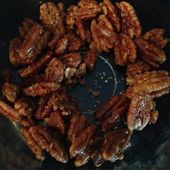 HOW WE SERVE OUR PECAN PANCAKES
BANANAS and PECAN PANCAKES
with COMPLEX BUTTER & CANDIED PECANS
Prepare the pancakes as directed on the package.
You will need 3 bananas, peeled and sliced in 1/4- inch
circles.
Cook the pancakes on 1 side until they are set and then
press banana slices into the batter. When small bubbles
appear on the uncooked surface, flip the pancakes and
cook until golden on both sides, about 8 minutes.
Transfer pancakes to a warming plate in the oven while
you make the rest.
To serve, slice the maple-honey butter, layer it between
the stack of pancakes and place in the oven to melt for 1 1/2 minutes. Sprinkle with
confectioner's sugar and candied pecans.
* Cook's note: the trick to perfect round pancakes is pouring all the batter in the same
spot and letting it roll out to a complete circle.
Complex Butter:
2 sticks unsalted butter, softened
1/4 cup pure maple syrup
2 tablespoons honey
1 piece of parchment or wax paper
In a mixing bowl, using a spatula mash the butter with the maple syrup and honey until
well blended. Roll it up in the paper, like a tube and twist the ends. Chill in the
refrigerator for 30 minutes.
Candied Pecans: with cinnamon and vanilla
2 1/2 cups pecan halves
2 teaspoon vegetable oil
1 cup granulated sugar
1 teaspoon cinnamon
3/4 teaspoon salt
1/4 cup water
1 teaspoon vanilla extract
Preparation:
Put pecans and oil in a flat baking pan; stir until pecans are coated. Roast in 300 degree
oven 20 to 25 minutes, stirring frequently. Cool.
Combine sugar, cinnamon, salt and water in a saucepan; cook, stirring, over medium
heat until the sugar is dissolved. Boil to 236 degrees by way of  a candy thermometer, or to soft
ball stage. Remove from heat; blend in vanilla. Add pecans and stir until mixture is
creamy. Turn out on waxed paper and use a fork to separate pecans.
(*To test for soft ball stage A small amount of syrup dropped into chilled water forms a ball, but is soft enough to
flatted when picked up with fingers.)
Enjoy, MARTHA